Doctor van Heijningen, born in 1961 in Utrecht (NL), started his education at the University of Nijmegen and graduated in 1989 as a doctor.
(During his internships he did an optional internship “health care in developing countries” where he worked as a student-doctor in a hospital in Tanzania and also worked for a few days with a plastic surgeon who came to operate difficult cases for “physicians without borders” )
In the 90s he completed his training as a plastic surgeon in both the Netherlands and Belgium. After a tropical health training in Almelo (Surgery and Gynecology Obstetrics) he was able to work as a resident plastic surgery in Eindhoven, after which he completed his general surgery training at the Catharina Hospital in Eindhoven from 1994 to 1997. He moved to Ghent for a course in reconstructive and microsurgery at the UZ in Ghent, and he completed his plastic surgery training between 1997-2001 in the hospitals of Nijmegen and  Zwolle.

He did fellowships in Belgium, the Netherlands and Germany, but also the United States (Boston, Dallas, Nashville, New York) are on the list.

In 2016 the doctor in the United Kingdom followed the training for the Earfold technique, an innovative technique for prominent ear correction that is done by few in Belgium.

Since 2001, Dr. van Heijningen has been active as a plastic surgeon in Knokke and Blankenberge in AZ Zeno (the former O.LV. Ter Linden hospital and Koningin Fabiola hospital. In March 2018, the new AZ ZENO opened its doors.

Since 2006 he has been leading the Duinbergen Clinic. 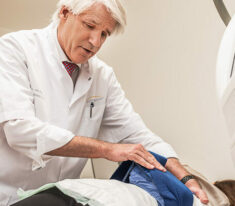 Since Duinbergen Clinic stands for safety and quality, it is not surprising that Dr. van Heijningen is associated with several associations for which he is fully committed.

As a member and / or chairman of several associations, the doctor has traveled around the world. He is a frequent speaker at various conferences.

Dr van Heijningen developed 2 European standards: EN 16372 Aesthetic Surgery Services published in 2015 and EN 16844 Aesthetic Medicine, non-surgical procedures published in 2017.
A standard for Beauty Salons is currently being developed in which he tries to come tot a safe concept in which the patient is protected against improper use of, for example, lasers.

Doctor van Heijningen has been organizing the “Aesthetic Dissection Course” in Liège every year since 2015, together with professor Jean-Luc Nizet. This is a three-day course for young colleagues concerning the anatomy of the face, with regard to aesthetic treatments and operations.

In October 2019, a three-day congress was organized in Bruges by the doctor for the EASAPS and ISAPS, with invited speakers from all over the world and visitors from 42 countries.

Duinbergen Clinic is an accredited clinic, this means that it meets the requirements of the AAAASF, this is the American Association for Accreditation or Ambulatory Surgery Facilities, where the highest standards must be met.

This is not an obligation, but a deliberate and conscious choice by doctor van Heijningen. The clinic is reassessed annually with an internal inspection every three years throughout the building, to assess whether we are fully in compliance with all protocols regarding (patient) safety.
In 2018 we again passed with flying colors.